When we discuss traveling throughout Europe, I usually envision the southern parts of the continent, Italy, my favorite country; France to see the romantic capital, Paris; Spain to see my college roommate in Madrid; and Germany to see the world-famous Christmas markets. I never really thought of heading North to Scandinavia other than off in the distant future to see the Northern Lights before we move home to the States.

But Tim’s work had other plans and here we were. Early September found us landing in Helsinki and traveling an hour north to the little industrial city of Hämeenlinna. The city is industrial in design, but it isn’t without it’s own beauty. Our hotel was situated on the picturesque lake that bisects the city and walks into the downtown area were short and frequent during our four day stint in Finland.

In reality, there isn’t a lot “to do” in Hämeenlinna as it’s not as much of a tourist destination as say, Helsinki. But our four days here were full of adventure none the less. Our entire stay revolved around three things; eating amazing, delicious food, strolling or hiking through the breathtaking natural scenery, and on our last full day, taking in the history of the local castle and the Finnish military at the military museum next door.

The food in Finland IS AMAZING! You read that right! Coming here I didn’t think much about what we’d be eating. As far as I know, Scandinavia isn’t know for their delectable cuisine so I was just expecting things to be passable. With limited choices of what was open on Sunday evening, our first dinner in Finland was at a steakhouse called “the Cellar” Halla. Only half the menu was in English but because we wanted to explore some of the local dishes, we spent a good deal of our menu reading time using google to determine what the ingredients were in different dishes. I settled on a cornflake breaded chicken breast served with a roasted red pepper “salsa” and herb roasted potatoes. Let me tell you, it’s not something I would normally go for at home, but it was absolutely delicious. Tim ordered beef schnitzel and though it was not even close to the chicken schnitzel I grew up with, he said it was spectacular.

The next few days saw a blur of one delicious meal after the other at places such as an Italian chain and an “American Diner” called 5th Avenue that was so kitschy and cute that I couldn’t get enough of it. (They even had Dr. Pepper!!). The piece de resistance, though, was our dinner at the hotel restaurant, Le Blason. I had the most amazingly different brie cheese salad and Tim ordered chateaubriand, which he said was the best steak of his life. The atmosphere was impeccable and we couldn’t have been more pleased with our amazing, albeit pricey meal.

Okay… so not really FOLKLORE persay… but go with me on the alliteration, ok? After work one afternoon, we headed to the Häme castle, or Tavastia Castle. Though the age of the castle is contested, there are solid archaeological finds that date it back to at least the 1320s. You know… just a few hundred years old…

The castle itself as a museum was interesting, but not chocked full of information. Maybe I’d have learned more if I spoke Finnish, but I was pleased none the less to explore a building that is so old. Inside one part of the castle it appears as if they have special events and dinners there. I pictured getting dressed up for a new year’s party or something and thought how amazing that would be. To be celebrating something in such an amazingly old location. Are there Marine Corps Balls in Finland??

Next door to the castle (and included in a dual ticket), is the Military Museum. I always find it interesting to read the stories of other militaries from around the world and Tim was especially fascinated. 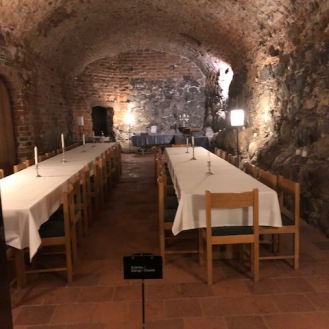 The dinning room was “closed for an event.” I want to go to said event! 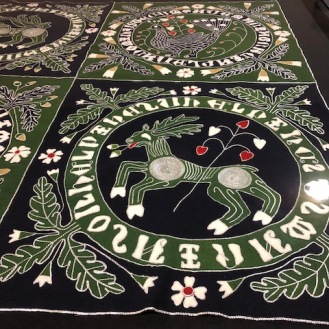 A reproduction of an original tapestry found in the castle. So amazing. 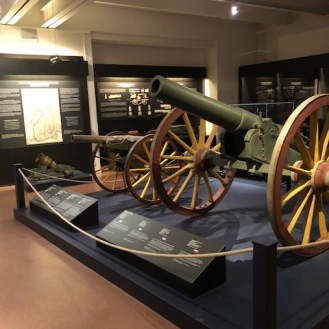 The military museum had tons of weapons and uniforms on display from all eras of Finnish history.

Food, drinks and the castle aside, there weren’t many other things to do in Hämeenlinna (shopping is WAY too expensive) and I spent the entire time Tim was working in the hotel room working on this blog or reading. But when he returned we took a hike each night and it was pretty spectacular. Hämeenlinna is bordered by the Tuijat nature reserve and there were several trails not far off a main road that took us to some breathtaking sights.

As we drove through the countryside, we saw what appeared to be castle ruins of some sort. It turned out to be Aulangon Graniittilinna and was some sort of outdoor amphitheater? But we didn’t find that right away, instead we happened upon signs with a drawing of what we thought was the castle-like structure we had glimpsed from the side of the road. Following signs the arrows on the signs, we hiked for several kilometers. I wavered between awestruck by nature’s beauty and annoyed that we just. kept. hiking. “It’ll just be a quick hike” he said. Eventually we happened upon what we thought was Aulangon Graniittilinna and I was sorely disappointed. No more than a carved wooden pavilion (Pavilion of Rose Valley), I thought it was pretty… but it wasn’t worth the hike in my opinion. At least not the way Tim built it up. So we took some lovely photos and headed back to the hotel. On the way back we took a turn too early and guess what we found? The Aulangon Graniittilinna. Well… at least we got photos? 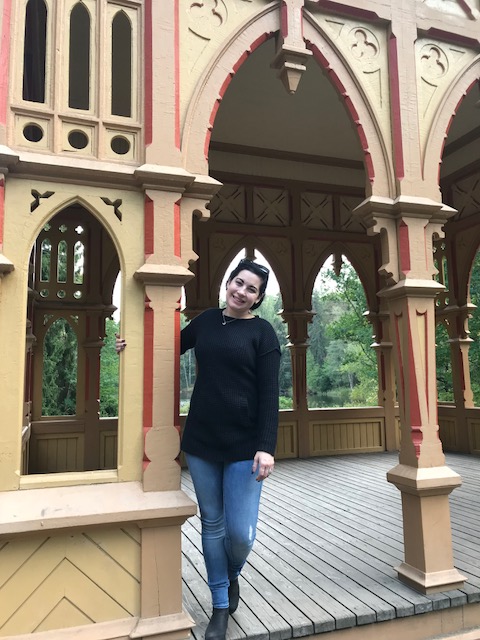 Pretending not to be sorely disappointed at the result of this hike.

The next day, while looking for other things to do, we determined that the signs we followed weren’t for the Aulangon Graniittilinna at all, but were for the Aulangon näkötorni, an observation tower…  and we hadn’t made it there…it was still a few kilometers further past the pavilion. The kicker? You can park at the observation tower… there are roads throughout the forest. Not that the hike wasn’t beautiful…but… you know how outdoorsy I am…

So with the actual name in mind, we were able to GPS the location and we set off, in search of the observation tower for real this time. We drove right to the parking lot outside the tower and boy was I glad we did. Because hiking to the top of that tower took everything out of me. I feel like I’m in decent enough shape, but 6000000 steps will make even the fittest person winded. After traveling in circles around the tower for what seemed like an hour but was probably only about 15 minutes and then holding our breath and  our way through a swarm of little flying bugs living in the top door, we were rewarded with the most awe inspiring view. I’m obviously including photos below. But I don’t think they could possibly do it justice. I could have stayed up there all day to watch the skies and the smoke billowing from chimney, warming a far off Finnish family.

It’s written that the famous composer, Jean Sibelius, who called Hämeenlinna home, was creatively inspired by the forests we walked through on our short trip to Finland. Personally, I’m not surprised. The beauty, tranquility and peace of those forests inspired me too. They made me want to paint, to write, to photograph it, to dance, to capture all of it’s beauty and channel it into something because I couldn’t get enough. It won’t be often that Tim needs to return to Haamenlina for work, but I can’t wait to go again.

This site uses Akismet to reduce spam. Learn how your comment data is processed.